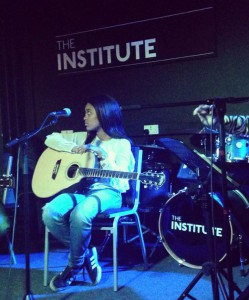 If you thought my discoveries of talent described in the previous blogs seemed like pretty random destiny, then you’ll smile at the way I came across this gifted singer songwriter. I was with my family in South London, and we decided on the spot to escape the cold by seeking refuge in a warm, rustic café, where we got talking to Atlanta. Suddenly we were three musicians in one conversation!

Ever since, I have been keeping up with her videos and tracks posted online. One of the first videos of her I saw was her live cover of Mad World, where her voice really reminded me of Emeli Sandé and a little of Rihanna. I always really enjoy watching RNB artists who can play guitar, because it’s less common for this style and adds mellowness to immense vocal power. This being said, her top influences are Chronixx, Alabama Shakes and Prince; three good reasons to be excited about what her upcoming EP might sound like (to be launched mid 2016)! This release will be called In Seven Days, so it’s worth keeping an eye out for that on her Facebook page.

You’ll likely be quite moved by her other posts meantime. You may have noticed that I choose to blog about certain artists because of who they are as well as what they do. Atlanta’s first song was written at the age of 9 for her sister who was going through a hard time. You can hear singers whose voices hold empathy, but with this she also carries the rare courage to be true to herself, both musically and spiritually. This is one strong woman to look out for in the industry.